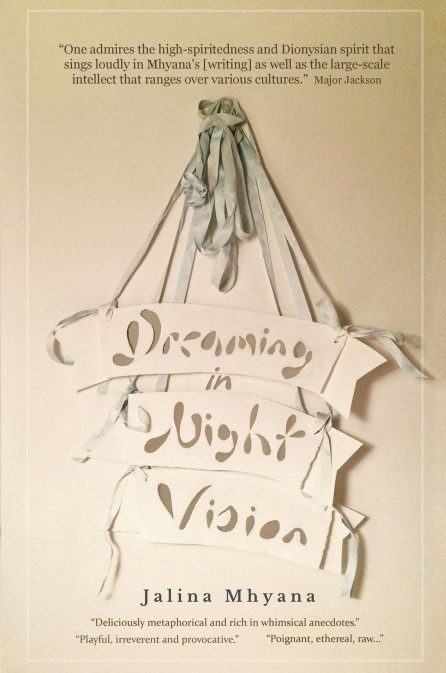 Published in exile, Dreaming in Night Vision is a richly illustrated, genre-defying collection of lyrical essays, letters, poems, epiphanies and ephemera with leaves in its hair and curses under its breath: equal parts fairy tale and cataclysm, caress and bite. Mhyana’s quicksilver style marries subjects as disparate as the periodic table of the elements, nude photography, reconnaissance maps, Japanese folklore, Blake’s Infernal Method, a vow of silence prayer book, her gender-fluid lover’s Ovidian metamorphoses, a eulogy turned into a sci-fi reanimation of a tangle of dreadlocked DNA, a poem about a paper-cut woman who performs hari-kari, and others.

Mhyana’s voice is that of a haunted child who collects small miracles in her pockets; a voice that telescopes outward to the aurora borealis which she calls down from the sky and ties around her daughter’s neck; a voice that offers up blue streaks of prayer on a hobbled pilgrimage. She also calls down the spirits of Gide, Homer, Dickey, Nabokov, Dickinson, Exupery, Julian of Norwich, Rilke, Opal Whitely, Thoreau, Bachelard, Nin, Giotto, Gould, and others – her troupe of Virgils – who guide her through forests “savage, rough and stern.”

The intoxicating lyrical meditation “Prospecting,” published in The Southeast Review, explores exile, loss, and poverty through the game of alchemy in which lovers prospect their ragamuffin apartment for what the Japanese poet Basho called the “underglimmer”- anything that shines: fools’ gold, a brocade cushion, haloes found in art books, nipple rings. They weave electricians’ copper wire to gold stigmata rays pooling in St. Francis’ palms in Florence’s Bardi Chapel; they plait burning candle wicks found in street corner Madonna tabernacles to Pliny’s description of gold mineral veins in river beds.

Ancient “shushing” goldmining methods were similar to Mhyana’s husband’s ssh, ssh lullaby as he rocks her, panning, looking for brightness in storms of silt. This togetherness leads to Odysseus’ bed as a symbol of identity, which brings us to the limbic system of the brain, and lastly, to a young scientist who discovered the missing element Prometheum. He died at the Battle of Gallipoli while sending signals using a heliograph to mirror the sun – similar to the body’s own battlefields; neural flashes and stutters, glints of gold.

Threads, wires, nerves, stigmata, wicks, riverbeds, filaments … we follow these Ariadne’s clues from Canterbury to Rome on the author’s solo pilgrimage, then strap ourselves in the passenger seat as she masturbates at 120 MPH on the Autobahn in homage to Sexton. From dissecting owl pellets for homeschool with her daughters {changing species by rearranging bones slim as eyelashes} to examining war through the lens of a modern-day Penelope, we accelerate through the maze of Mhyana’s psyche – a drunken joyride along switchbacks and cliffs – into a dark, intriguing world that’s alive with mirrors, echoes, and shadows and can only be navigated in night vision.