The woman on the top of my book cover tumbles into sleep with a twist of the toy’s ribbon and soon she’s dreaming that there’s a demon on her thigh.

When the paper coin spins, the woman becomes blurry and merges with an image of a little demon printed on the opposite side of the circle, so it appears the demon has perched on her leg.

The optical toys on the cover of my 2015 book of poems, The Trauma Scope, fool us into seeing the following: a demon lands on the woman’s leg, a man’s head gains a torso, and a bird appears in the cage.

The world cartwheels to us.

Images flip upside-down in our minds before righting themselves again so we can make sense of them and ourselves in relation to them. In this way our eyes are camera obscuras, performing optical gymnastics in milliseconds.

Rebecca Dunham’s The Flight Cage, one of my favorite contemporary books of poetry, plays with similar issues. The gorgeous cover bears a thematic similarity to the woman-in-birdcage cover of The Trauma Scope – a woman or mannequin trapped in a crinoline bird cage ironically referred to as a “flight cage.” 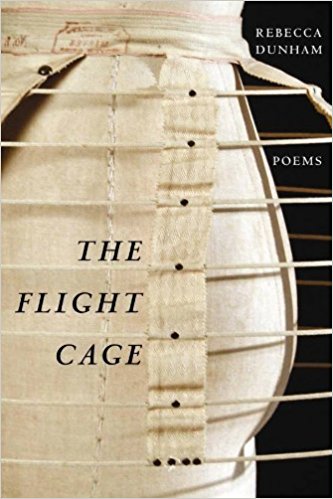 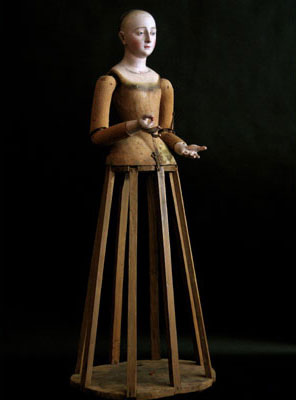 The pelvic girdle and hips are birdlike in design, with iliac wings fused in the middle by the sacrum. The artwork below plays with this similarity or rhyme in design: 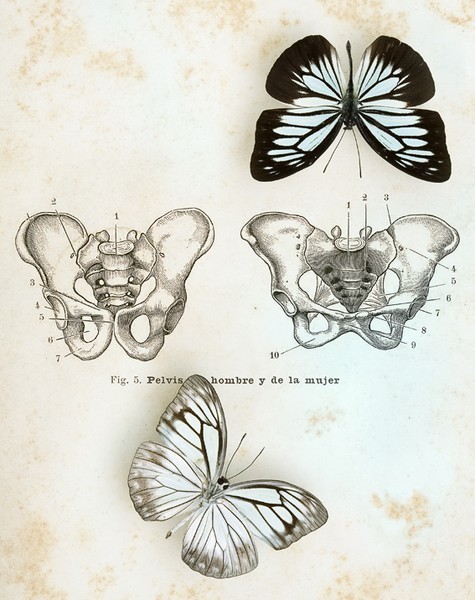 Bird cages remind me of santos saint dolls that I see in nearly every antique shop in Florence. I adore them – their androgynous nature is so like my husband’s self-portraiture, especially the photographs in which he has encased himself within plywood crinolines that scrape his waist raw. He undresses by prying nails loose with a hammer’s claw.
The saint doll’s palms are held open to the sky in an attitude of acceptance and openness, like I observed in the parishioners during a mass at the Basilica of Santa Croce. As if heaven might fall and you could fill your palms with it.

Renaissance saint dolls have no need for the bottoms of their bodies; they’re consumed by spirit to their waists. Their abstinence is caged, just in case; a skirt-shaped chastity belt.

I fell in love with an exhibit of medieval chastity belts at the Torture Museum in Rothenburg, Germany. Each had small holes in the shapes of stars or hearts, to enable waste to exit.

The cage dolls are a little bit like a pyramid of kindling for a bonfire, which makes sense, seeing as bonfire stems from “bone” fire, the roasting of saints. Each saint doll comes equipped for immolation.

My imaginary saint doll would have Blake’s “tyger, tyger burning bright” pacing inside its crinoline chastity belt, daring a hand to seize its fire.