Skip to content
My husband’s Florentine art studio on via dei Pepi is a small space shared with a violin-maker. The floor is carpeted with bass clefs of sawdust; an abattoir and atelier of music.
Song involves small traumas; strings break, reeds splinter in the mouth soft as popsicle sticks, joints freeze, violins warp, gaskets crack, fingertips callous, pianos self-harm in dark closets, and throats carve octaves in the air much like Shakespeare’s Pygmalion fantasy about a “chisel that can cut breath.”
I cut my teeth on this city, alone after twenty years, my first stab at independence. As an exile I ramble aimless and lonely, untethered to anything but whim through this city and its sleepwalkers, players, kissers, dawdlers, and scribblers.
I sleepwalk Florence in the late hours, when women usually sight-see in pairs or warm shadows with their lovers. I reclaim the city from hawkers and tourists, chisel my name onto each inch. The walled city becomes mine; every statue, coat of arms, cobblestone, and streetside symphony. My coat of arms hoards it all in a miser’s embrace. 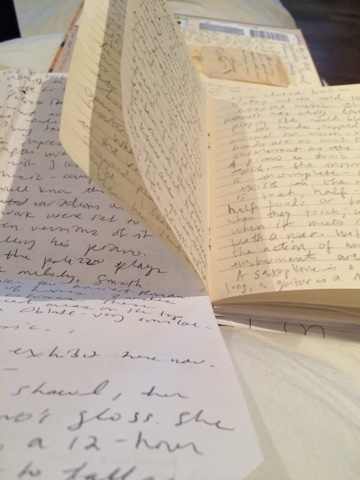 Several months ago I wandered into Palazzo Strozzi well past midnight, lured by the lullaby of repetitive piano music –  Vexations by Erik Satie. The pianist had been playing the same melody for nearly eleven hours. She stopped only to cup her hands and blow hot air into them. Her fingers seemed as much a part of the instrument as the piano; slim muscles strung taut as wire. Her hands slowed, then stiffened like a spider who doesn’t know it’s dying.
There was an art exhibit at Palazzo Strozzi that night – Chagall and others –  floating whimsical paintings that seemed to illustrate Satie’s piano lullaby.
In Gondry’s film The Science of Sleep, Gael García Bernal threw cotton wool into the air as his neighbor and love interest Charlotte Gainsbourg played a magic chord on her piano which inexplicably held the cotton wool clouds aloft in the sky of her Parisian apartment. When the piano went silent, the sky fell into Bernal’s lap. 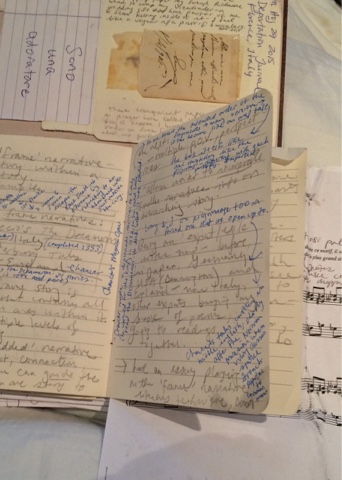 When Vexations ended, I continued to wander through the city well past 1:30 and found myself in the Cortile degli Uffizi,  I sat on the cool steps in front of Galielo’s sculpture, wishing I could borrow his telescope to watch a street musician. The audience watched from recesses and alcoves, as transfixed as the statues.
The violinist rested his head on the instrument’s hip as if sleeping through his own performance. His arm was the only thing awake, inflicting violence upon the wood and strings. He sliced the neck and fretted by feel.
Chords startled, ripped, swooped, and moaned from that throat he threatened. He slapped and spanked the curves as they sang. Low notes lingered like bruises above the scant crowd gathered in the cortile. We all watched the body flayed, its screams and heartbeats foretold on sheet music before my grandparents were born.
Lovers nearby caressed each other to crescendos. I wanted to hold my arm over the musician’s arm, so he could teach me how to make that hourglass scream, sing, whisper, cry. We would stroke its body together; his arm my locomotion, my training wheel. The bow would be our axle and axe – cutting, sliding, slipping, slapping.
Slicing echo from echo.
Bloodletting.
In Italian, cello sounds just like cielo; sky, or heaven.
I’ve always wanted to play the cello; the whole sky squeezed between my knees like an accordion – every bird, angel; every flying singing thing.
In his autobiography, Chagall confessed that he might have painted a hidden letter in the pocket of his musician in Green Violinist.
I had no Euro coins so I wrote to the violinist instead, as he played, so that he would have a letter in his case when his arm dropped exhausted to his side and the sky fell.