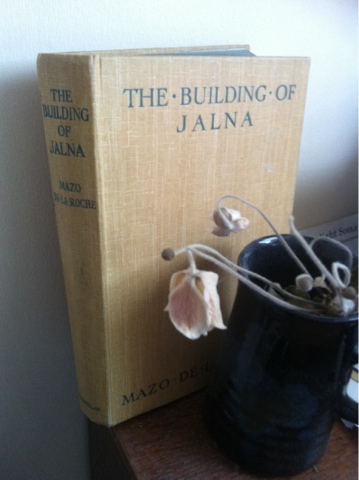 I’m collecting quotes from this book (about building a country estate from the ground up) for a poem entitled The Building of Jalina, all about how to rebuild me when I’ve broken down, which is often.
The poem is a manual. It tells my partner, Sean, that I should be built in a forest of wild lupin, chicory, and gentian in patches of celestial blue…”in a primeval stillness broken only by the myriad twitterings from swallows’ throats, a great cloud of which settled on the framework of Jalina’s scaffolding by the thousands, perched wing to wing,” acting, it seems, as guides and watchers. “All these thousand sharp beaks and eyes…alive for the destruction” of anything that might threaten the building of Jalina.
Sean is there too, watching with sharp eye for anything that may threaten my security, when my roof has blown off, when I’m “windowless, doorless, in some places floorless,” with chips of pine scattered at my feet, filling the air with the scent of sweet resin. Sean fells great trees “in a storm of green leaves,” swinging their boughs in a storm under his “bright axe” to fortress me.
The book tells how we walked along footpaths deep into the forest. We share a picnic, something stirs at my feet –  an adder  – its whip slithered into the hedge, a specimen “a yard long and as thick as an arm.” I fell apart but Sean beat the snake into the ground. The snake is heartbreak, the flu, an unkind word, a nightmare, a flashback. He builds me up on the back of a snake. It’s my foundation, built in an arbor of honeysuckle, choke-cherries, and destroying angels.
Any little wolf can blow me down. But when they do, they see the adder wrapped around my ankles and flee.